The Hidden Autistics - Asperger's in Adults 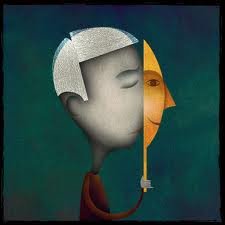 Recently I encountered a problem while collaborating with a group therapist with whom I share a patient. My patient has progressed quickly in therapy, as do many adults on the spectrum.  However he did not start off as stereotypically autistic.  In fact, initially he presented as many of my patients do: shy, articulate, witty.  Good eye contact.  Appropriate affect.  Typical posture, gait and gesturing.

It took a few sessions to realize this fine gentleman suffered mightly with the symtoms of Asperger Syndrome, which he kept well managed and thoroughly hidden.  Contrary to the stereotyoes of adults on the spectrum, my patient displayed no "meltdown" behavior, was keenly (TOO keenly) aware of people's reactions to him and exhibited no bizarre special interests or encyclopedic knowledge of vaccuum models.

In fact, "Joe", as we'll call him, socialized quite well.  He seemed quietly confident and wry, intelligent and perceptive.  People responded well to him, really liked him, though probably none of them would describe him as a close friend.  No one realized - in fact he often went without realizing - that his baseline anxiety approached panic on a regular basis.  As soon as he was out of bed, existential angst was his constant companion.  His difficulty managing his thoughts made rudimentary conversations minefields to be navigated.  And navigate he did, dodging social errors with the same fright and determination one might actually dodge mines.  After even minor social interactions he routinely found himself exhausted, and would retreat to soothing, isolated activity: sculpture, writing, woodworking.  Not conversation with his wife.

Diagnosing this man was problematic.  He truly did not fit the criteria for Asperger Syndrome.  In fact, the only person to suspect he was on the spectrum was his wife, who puzzled endlessly about this curious man.  He seems so sensitive and kind, she would say.  Yet he ignores my birthday and hangs up before saying goodbye. He's so charming with others, yet so silent at home.  He never misses a deadline at work, yet cannot remember to give our dog his heart medication.

Partners of people on the spectrum are drawn to what they can sense is inside their partner.  Yet they feel shut out, left pining for connection with this special person who remains unreachable.  It can be a confusing relationship, and one that can easily lead to resentment.

So what was the problem I ran into with the collaborating therapist?  She found it hilarious - outrageous! - that Joe had been diagnosed with Asperger's.  When Joe would make an insightful comment during group session, this group therapist and members would share a hearty laugh, rolling their eyes that this sensitive man had been diagnosed as autistic.  When Joe would tear up recounting his wife's rage and disappointment, he'd hear "So Mr. Autistic is shaking because his wife got angry!  Ha ha!  Shouldn't you be indifferent and focusing on dinosaurs?" (I'm sorry to say this is a direct quote.)  The general public, even many clinicians, cannot believe someone like Joe can be autistic.  His social deficits are so well hidden that he has convinced the world his autism does not exist.  And he has perhaps convinced himself.

One person remains unconvinced.  His wife.  After a long day of running what he terms his "social program", feigning natural banter and hiding anxiety, he is exhausted.  His wife comes home to a man who has retreated to isolation as a desperate attempt to find peace and rest.

I'd like to write more about this "hidden autistic" phenomena.  Someone must.  Adults on the spectrum are often too good at convincing others they are fine, have no emotions, are robotic.  This is never the case, and the illusion can be dangerous to long-term mental health for autistics and their partners alike.
Cary Terra, M.A., LMFT 232 comments:
Share
‹
›
Home
View web version