The Outsourcing of Emotions: Adults on the Autism Spectrum 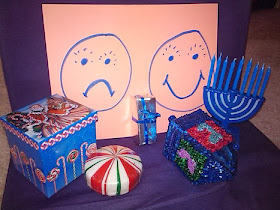 What gets repressed will be expressed...
not by you – but by your partner.

There’s this interesting phenomenon I notice amongst couples I work with.  It involves emotions, and how partners work together to manage unmanageable emotion loads.  They may not see it this way, but from my perspective it looks as though they are unconsciously dividing up and sharing emotions such that their partnership stays, although maybe uncomfortable, intact.

As you probably know, lots of clients on the spectrum describe feeling “flat”, or emotionless.  They seem to have identified only two emotional states: undistrurbed and disturbed.  Distrubed emotional states are extremely uncomfortable and difficult to recover from, so, logically, many try not to get disturbed in the first place.


Between the Aspie client and his emotions is an extremely effective dam, and he feels little control over how wide, if at all, the floodgates are opened. While there may not be an accurate sense of what feelings actually lie on the other side of this dam, what is felt is a real dread of the size and intensity of these unknown emotions.  Clients seem to spend much of their time avoiding this dread, and occupying their interests and attention to this end.  They may spend time thickening the dam walls, by caking on layers of avoidance through distraction, compulsive working or even substance use.

This might work well, if only the emotions didn’t somehow leak out from beneath the dam, or spill over the top.  But, in fact, the dam does develop cracks. Minor cracks can bring anxiety and irritability, while major cracks can bring panic and apathy.   The great, nameless fear is that if the dam breaks, one might be engulfed, or even annihilated.  And since, when feelings leak out, they really do tend to be overwhelming, this theory gains credence over time.

In times where pressure mounts, the adult on the spectrum often employ one of two methods for emotion management – 1) he more frantically pursues his interests (because he’s increasingly desperate to distract from the pressure of mounting emotion), or 2) he provokes the emotion’s expression in his mate. I call this last tactic the outsourcing of emotions. It’s effective in the short-term, but can damage the attachment between partners.

Joe and his wife (we’ll call her Jane) and two kids are preparing to leave for the event, and unspoken tension is high.  Joe is experiencing anxiety, but it’s a mindless kind of anxiety – he hasn’t really named the feeling, and therefore hasn’t had the opportunity to really solve for it.  What he does internally is a kind of disconnecting from the people around him.

Joe is on auto-pilot, and has decided the family should leave at 3:00 PM on the dot.  He fails to communicate this to anyone but himself, and instead imagines his family members know, or should know, about the deadline.  Of course, 3:00 o'clock comes, and 3:00 o'clock goes, and no one is ready to leave for the event.  Except Joe, that is.  He’s been alone waiting in the car for half an hour.

Once Joe can silently stew that his family members are not meeting expectations (of course there’s no way for them to meet expectations they don’t know exist!), he has a reason – a righteous reason! – for disconnecting.  Joe hasn’t learned how to rely on other people as sources of comfort; instead, they often feel to him like sources of danger.  Read on how this becomes a self-fulfilling prophecy, once the afternoon continues to degrade.

When finally Joe’s family members join him the car their emotional states have all arranged predictably: Joe is sullen and removed, Jane is frantically positive (trying to save the day from the inevitable), and the kids are becoming increasingly hyper and disorganized.  Once on the road, Joe begins driving with too much intensity, his jaw set and his gaze focused solely on the road.  When asked what’s bothering him, his reply is “nothing”, though various sources of stimuli are now crowding in on his consciousness – the noises, the sights, the chaos. Joe might truly believe at this point that his irritation is due to the missed deadline.

He may snap at the children, park too far away for his spouse’s taste, "sneak" an obvious glance at another woman – whatever the behavior, chances are he’ll continue until some unspoken line has been crossed.  Once it has, Jane becomes angry, and loses her temper.  She’s exhausted by the game they’re both playing, but unable to move differently in this very familiar dance.  “So many outings go this way,” she thinks.  “Why do I even try?”.

Once Jane is angry, Joe can finally feel the sadness that has been fueling his behavior all along; and in this, he feels saner.  This seems so counterintuitive, doesn’t it?  But from Joe’s perspective, you see, the situation – and his reaction to it – now makes sense.  Joe finally feels like what he sees (his angry wife) has justified his internal state (anxious, excluded). And Jane has become the expresser of his angst; while he hangs back from the family, she has become irritable and overwhelmed.  Unconsciously, she has taken on his unbearable emotions.  At her own expense, she has served as an emotional surrogate of sorts.  Now Jane is feeling many of the feelings Joe had in the first place – Joe has outsourced his emotions.

The down side of this dynamic?   It is unconscious – Joe has not slowed down enough to identify, label, and communicate his distress (many clients don’t, because they feel unaware or ashamed that routine family outings cause them so much anxiety and confusion in the first place).  This outsourcing technique may save Joe the ego hit of having such struggles, but prevents his true solving of the problem.  What Joe actually learns, unconsciously, is that these states really are unbearable – that his spouse can bear them better, and will do so for him.

Jane is also unconscious to this process, and is thus operating in the relationship in a way that damages her sense of self and sanity.  She may find, upon careful examination, that she has functioned this way in relationships before, especially in her family of origin (where we tend to learn these habits).  Perhaps she’s so good at intuiting the emotional states of others, that she confuses them with her own.

It’s so important to realize that there is no perpetrator here – Joe and Jane are both victims of this unconscious system. These roles and ways of transferring around unbearable emotion loads develop organically, and both members of the partnership play along.  Each feels as if s/he has no other options – he hasn’t found a way to deal effectively with his suffering without transferring it, and conveniently, she’s confused his suffering with her own, and therefore can't resist feeling it for him.

The fascinating part about this is that, in general, the outsourcing goes both ways.  There are plenty of times when the spouse does some outsourcing of her own – I hear about it in sessions when couples are discussing how much anxiety builds when, for example, guests come to the home.  In instances like these the roles are often reversed, with the Aspie partner working hard to absorb her unbearable levels of anxiety, and her neglecting to slow down long enough to truly manage her own emotional state.  The process might look very different on the surface, but a similar unconscious transfer of emotion is occurring.

Can we learn to operate differently in these situations?  Sometimes the patterns have been relived over and over, over years and years, maybe even passed on from generation to generation.  It seems so hopeless.  But it’s not.  The first step is to slow down and learn how to label emotion states.  I have many clients who cannot tell if they’re hungry, sad, tired or angry.  They skip over finding out, because they’re not good at it immediately, and because it takes time.  But it’s a crucial step to avoiding these mood management techniques that exploit relationships and erode our attachment.

(BTW- thank you to B.H. for encouraging me to get back to posting!)
Cary Terra, M.A., LMFT
Share